This is my all-time favorite Christmas song. Enjoy it!

Thanksgiving has come and gone and I have the leftovers to prove it.The meal was our best Thanksgiving dinner yet. 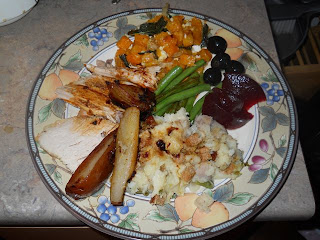 I also made a pot of Thanksgiving Wassail and enjoyed it all day long.

Now it's time to think about Christmas. We are having an early Christmas Dinner next weekend as my mom will be here visiting. Time to put my thinking cap on and plan the meal.

Have a great weekend! 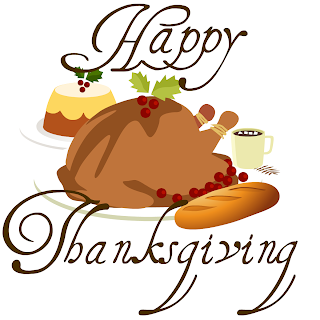 May your day be filled with family, food, fun and football!

My snowflake is ready for beading 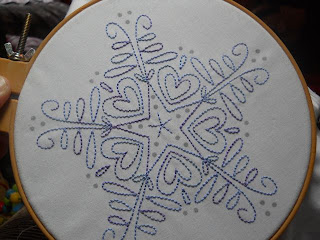 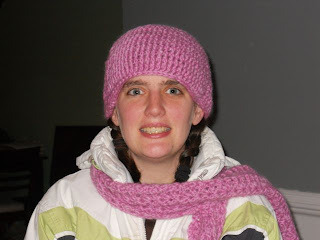 Side view of the hat 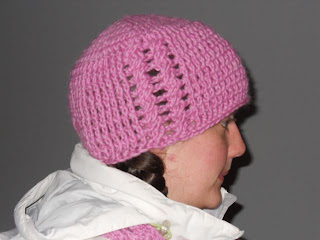 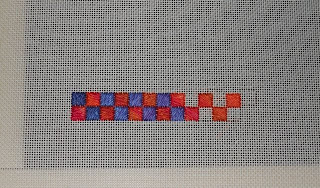 What are you working on this week?
Posted by Sweet P at Wednesday, November 24, 2010 2 comments:

If you are a regular reader of my blog you probably know by now that on Tuesdays I take care of my grandson, Mr. E. In an effort to keep blogging on a regular basis and not overload you on Mr. E, I'm going to make Tuesdays my Toddler Tuesday posts.

Today, he found a box of floral marbles while we were doing laundry in the basement. The box came upstairs and within a few minutes the marbles were all over the floor. Mr. E had a blast playing with them off and on all day.

In case you're wondering, nearly all of them are picked up, or at least the ones anyone has the potential to step on in the the next few days.

Random thoughts and questions on Monday morning . . .
Well, the clock on the wall says it's almost 9 am. Time to get sewing.

I received my Winter Tote Bag package from Sabine the other day. Unfortunately, the postal service was not kind to the box. It arrived smushed on one end of it. The result was moisture got into the package and caused the red floss in the box to bleed on a few of the pressies and the tote bag.

Luckily only one side and the corners of the stitchery are red. I'm pretty sure I'll be able to clean it. I'm going to be using it anyway. Isn't the stitchery adorable? My favorite winter scene - a snow man! 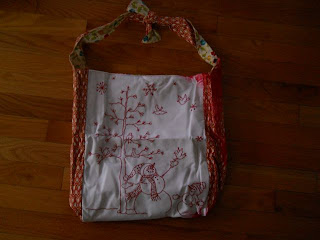 Here is the back of the bag. I love the fabric she chose to use. 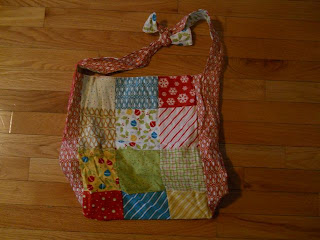 Here are the rest of the goodies: there is a package of teddy bears to stitch, red floss, a package of sewing themed buttons, pins, a stitchery calendar, a beautiful red plate and Christmas candle, an adorable angel and chocolate. The cookie recipe sounds yummy and I hope to try it soon. Thanks, Sabine! 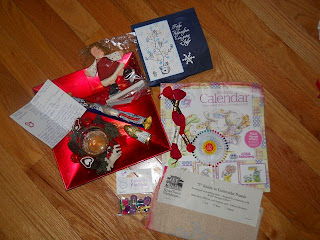 Have you received your Winter Tote?

Me and The Process Pledge

I took the Process Pledge because I love to think about my process when I am creating. I love the feel of the fabric as I work with it. Cutting it, pinning, sewing, snipping and pressing until I have a finished project.

I had every intention of documenting my process as I worked on swap packages. What I learned is that when I'm sewing I get into a Zen-like state and the last thing I want to do is stop to take a photo or jot notes about the process. So I though I would share a few random photos of what I've been working on the last week.

I made a puppet theater curtain for Mr. E.
I found the fabric in the remnant bin at the store and it jumped into my hands. 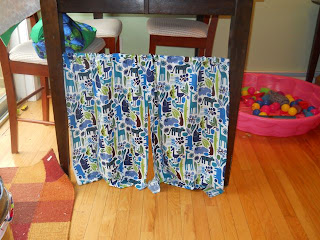 Here is my SSCS present . . . don't you love surprises? 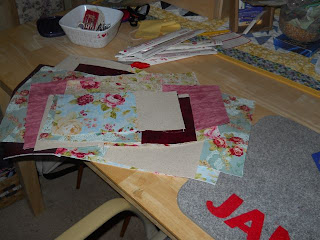 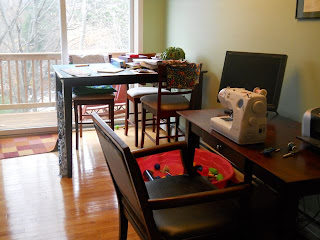 Yesterday afternoon I took an afternoon off from Christmas sewing and had ME time. On Sunday I found a gorgeous set of snowflakes to embroider at Polka and Bloom. I had to order the set and when I came home from work on Sunday night I transferred the pattern and yesterday started stitching it. I'm using a over-dyed blue and lavender thread. I'm thinking of adding beads to it instead of the french knots the pattern uses. 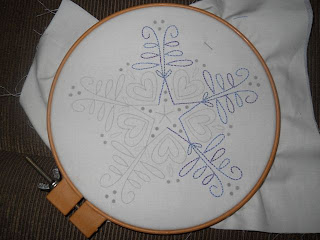 Well, the mailman just brought my 3-2-1 Winter Tote Bag package from Sabine. I'm going to sign off for now and open the package.

Recently I joined Finn's New Year's Eve UFO Challenge. I pledged to finish at least 4 projects by Dec. 31. So far I've finished two projects. First up is Mr. E's Pumpkin Sweater. It was his Halloween costume, but it's big enough and warm enough for him to wear all winter. 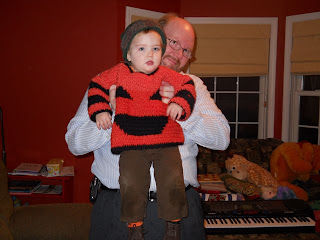 My second finish was a coffee-themed table topper. I bough the panel about three years ago. The borders were added about two years ago. I was going to hand stitch it, but when I was cleaning out my stash closet I decided to machine quilt it and finish it. It is now on our dining room table. 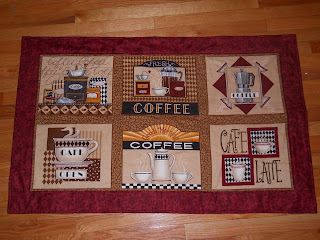 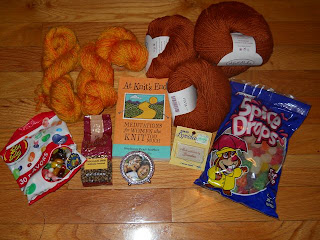 I also received my FRIENDS swap package from Pam at Versana.
The gifts were gorgeously wrapped and were too pretty to open. 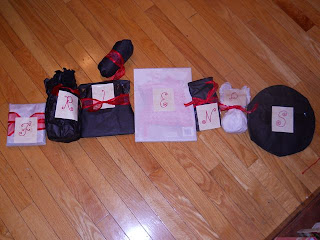 And here are the gifts: F was fabulous fabric. R was jar filled with red buttons and chocolate and topped with a red pincushion. I was an Indigo Bag and a skein of blue yarn. E was an embroidery book (and a Fair Isle crochet book). N was "Needful" things - two skeins of Caron Watercolor floss I need to work on a project. D was delightful cinnamon jelly beans. 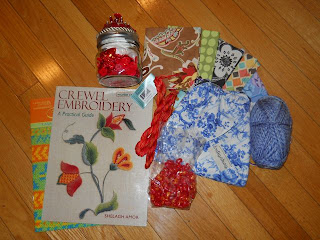 S was this stunning silk painting Pam made for me. Isn't it fantastic? 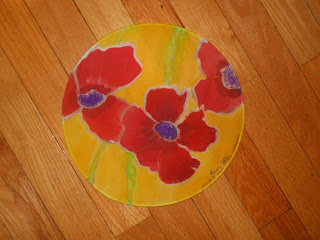 And, just for fun, here is a recent photo of Mr. E and I. 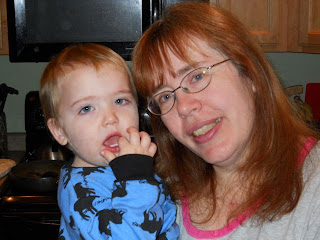 Tomorrow I'll post about my Process on the Swap packages. I've been able to sneak in work time between working and taking care of Mr. E.

Sweet P
I love to play with the fabric, threads and fibers. I support my habit with a job at national fabric and craft store. Some days I do leave more money at work than I make. I never feel guilty about it. When I'm not working or playing or spending time with my grandson, Mr. E., I love to cook, take care of my home and spoil my DH, the Hotel Man.

Found On The Internet

Being creative makes you a weird little beast, because everything seems so bloody interesting for some strange reason.